Cedar Rapids – The Revival Theatre Company is ending their inaugural season this weekend with Pippin, comprised of an all-star cast. In short (and overly simplified), this musical uses a performance ensemble who pulls Pippin from the audience to share his story. We learn that Pippin, played by Nick Arceo, is a prince who feels lost and, like many of us, is struggling to find his purpose in life. We watch him experiment with drugs and sex, challenge his father and fall in love. In the end, he has to decide if being extraordinary is what he truly wants in life or if there is a simpler path.

Directors Brian Glick and Cameron Sullenberger hoped the audience would experience the same “razzle dazzle” they’ve felt every time they hear the score from Pippin, and their hopes were realized. The musical was deservedly met with a standing ovation for many reasons, one of which was Alisabeth Von Presley. This talented performer both choreographed the musical and played the part of Leading Player, who helps narrate Pippin’s story throughout the musical. Von Presley delivered her role with engaging acting, phenomenal singing, and, with the rest of the cast, dancing that was so fun I wished it wouldn’t end. 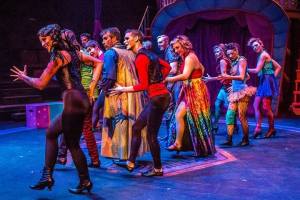 If life were YouTube, I’d replay her performance of “Glory.” It was one of the more captivating moments of the play, in part because her singing and dancing worked so well with the lighting and the band. Everybody was beautifully in sync, making it look like her movements caused the music and lights to work with her. It was the magic promised by the directors.

As Pippin, Nick Arceo drew the audience in from the moment Von Presley pulled him to the stage. His boyish charm kept us cheering for him, even during Pippin’s darker times. To say that he — and the whole cast, really — gave an energetic performance would be an understatement and his crisp voice brought the songs to life beautifully. Arceo captures Pippin’s quest to discover a greater purpose in life a comical, thought-provoking way and I cannot imagine a different actor playing this role.

Lacie de Souza, who played the role of Pippin’s love interest Catherine, also managed to stand out from this remarkable cast. She joined in the second act and brought a fresh new energy with her. Her timing and subtleties (well, sometimes purposeful not-so-subtleties) in her behavior added a sort of humor to the stage that we hadn’t seen before, but definitely adored. She also brought a softness to Pippin, both the man and the musical, that we were ready to welcome.

Typically, I like to come up with some sort of constructive criticism for even the best performances that I see. It can be helpful for folks involved with the performances to strengthen their work. Throughout the entire show, I kept my eyes open for something to suggest for improvement. However, as I looked around, I was simply… dazzled. The cast had fantastic hair, make up, and costumes. The blocking made sense and addressed what could have been a difficult situation, because the Dows Theatre has 360-degree seating. Even better, because this particular musical breaks the fourth wall, I liked that the actors often walked through the aisles — it’s one of my favorite staging choices that I think is underused. The lighting subtly added to the ambience of the scenes. Props were minimal, leaving more room for the extensive choreography. The set design was ideal with colorful fabric that draped down beams, suggesting that we were in a tent where the ensemble performed Pippin’s story. The pacing was perfect, the casting was stellar, and the entire cast blew us away with their singing and dancing abilities. I’d like to suggest a way to add more razzle to the dazzle, but this musical is set.

There’s a lot going on in the Corridor this weekend, and seeing Pippin has to be one of the things you do. There are only two performances remaining – tonight and tomorrow. Ticket information available here.

One thought on “A Review of Pippin”