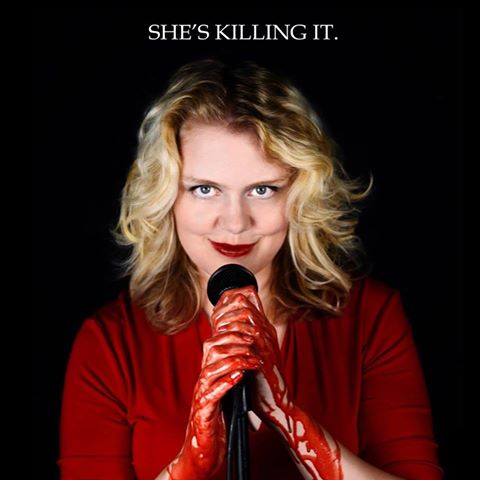 Iowa City – I feel I should open the review with a witty comment since I’m reviewing Megan Gogerty’s latest show and she’s master of the witty. But try as I might, I got nothing. So I’ll just cut to the chase. You really need to see Lady Macbeth and Her Pal, Megan. Come for the comedy, and stay for the life changing moments. As a father of three girls, I have to say: Bring your teenage daughters. Just don’t tell them how cool Gogerty is lest you undermine her coolness before they arrive at Riverside Theatre.

The one-woman show is essentially Gogerty examining the character of Lady Macbeth after being told by a friend that she could never pull off the role. Her friend, Alexis, says to her:

“Megan, Lady Macbeth is a tragic figure of powerful darkness, and you are the human equivalent of a golden retriever.”

Gogerty is (humorously) offended by this. And so she explores the character of Lady Macbeth on stage, but more interestingly that exploration includes a rather personal journey of herself, as she tells us about her discovery of womanhood and her failures and successes at stand up comedy, with all of this driven by her worries and fears about growing older.

We all know Gogerty is funny. Some of us remember her being funny in the ’90s on the No Shame stage at the University of Iowa. What’s different about this show is with the funny, Gogerty also brings a gutsy vulnerability. She is willing to lay bare her journey, including all the missteps and wrong turns. This is a brave performance, an incredibly personal one, and because of that, it’s inspiring to experience.

Gogerty discusses Lady Macbeth, who has a clear life goal – to become queen. Sure, she’s a murderer, notes Gogerty, but so are Walter White and Tony Soprano. Why do they get to be anti-heroes when Lady M is a bitch? The answer is obvious – sexism – and Gogerty doesn’t dwell on that. There are many more twists and turns to her journey, but in the end Gogerty discovers it’s not about smashing sexism with angry words and giving as good as you get. It’s not about collaborating with the misogyny to fit in either. And it’s not about tearing people down. Gogerty finds another path and at its essence, it’s powerfully feminine. I’m being a little vague here so as to not spoil it, but trust me when I say this is not a life lesson you want your teenage daughter spending 40 years figuring out. So bring ’em to this show and give ’em a headstart!

At different points in the play, Gogerty becomes a number of different characters – her friend Alexis, Lady Macbeth, a Witch or three, a 24-year old aspiring male comic, and many more. This is where Gogerty demonstrates her acting chops, clearly creating each character by perhaps hunching over to become the witch, adopting a casually aggressive expression as the male comic, or standing tall as Lady Macbeth.

Theatrically, the show has a number of wonderful moments. The stage is mostly bare with just a lamppost and an acting cube. Director Saffron Henke made a lot of smart choices about where Gogerty moves on stage. One of the dangers of a one woman show is allowing it to become too static or, taking it to the other extreme, allowing the actor to move without purpose just to create movement because you’re afraid it’s too static. That doesn’t happen here. The moves are clearly defined. Stage left is used when depicting Lady Macbeth (along with a disturbing red light for emphasis). Whenever Gogerty is remembering a time that she was on stage as a stand up comedian, she steps on top the acting cube. These are smart moves that help the audience to follow the action.

Wonderful lighting choices by designer Kristen Giesler also enhance the show. There’s a particularly cool and creepy lighting moment when Gogerty has become one of the witches from Macbeth, and then wham-slam, we’re back into regular stage lighting. It’s a great effect that keeps the audience on their toes.

Kudos also to Costume Designer Melanie Mortimore for creating a neat costume piece that changes to make one crucial moment late in the play work really well. And since no one ever remembers the stage manager, let me take a moment to compliment Kelly Garrett for keeping the ship moving forward so well.

This show needs a bigger audience than Iowa City. Fortunately, Gogerty is attempting to take it on the road… all the way to the Edinburgh Fringe Fest. Go see the show, and then if you think it’s worth it, consider helping her raise the funds to make that happen. Trust me – this is a show you do not want to miss. It’s powerful, and empowering, and poignant. And it’s really, really funny.